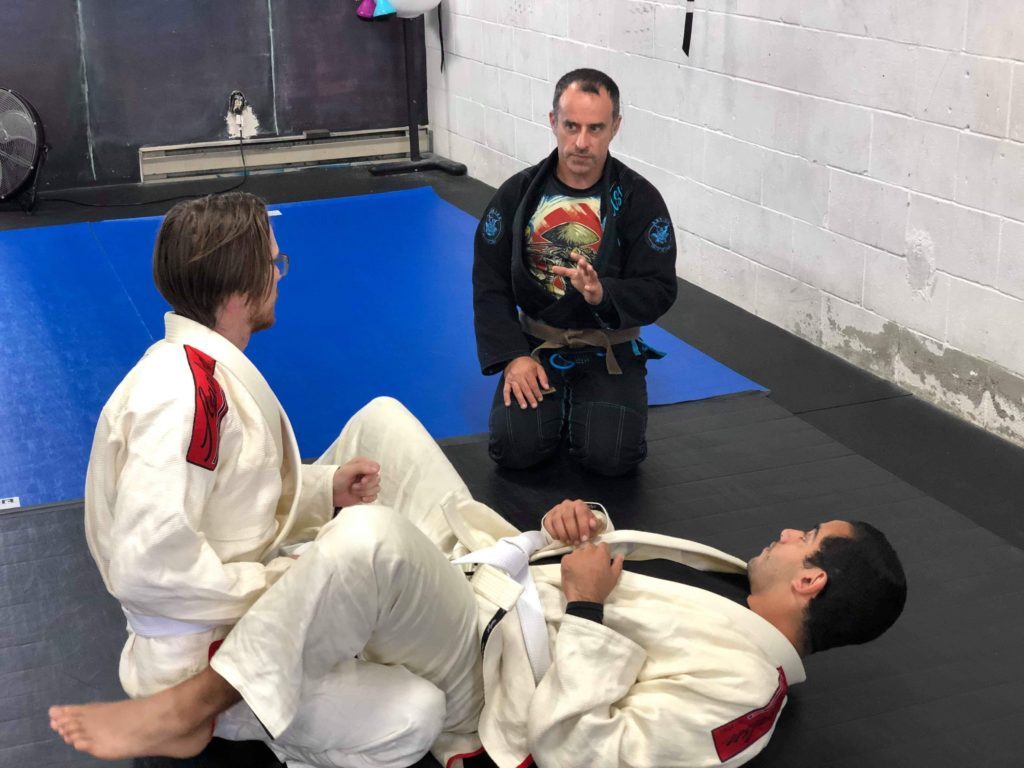 By Shawn Mozen – BJJ Coach (as told to Jamie Rebner)

Martial arts build confidence like any other sport, but I think the combative nature of it also has a different element. In Brazilian Jiu-Jitsu (BJJ), where someone is trying to choke you, it’s you against the other person. There’s no team to blame for your defeat; there’s nobody to hide behind. That builds a different kind of confidence. It also produces an understanding of taking ownership of your successes and your failures.

Jiu-jitsu takes not only all your physicality, but all your technique and mental prowess to defend yourself, stay safe, and then get your opponent to submit. So you are problem-solving under pressure that carries over to your life because if you can do it in that circumstance, then handling the stress of a test in school for example, is a lot less stressful.

I am the head BJJ instructor at Agatsu Montreal, but this isn’t the first thing I taught. I instructed Karate for many years and even taught other disciplines like art and drama. But it is coaching fitness and martial arts that I became most passionate about and what occupies the majority of my time today. It was only this past summer that I decided to open up my school, where I make sure to keep BJJ true to its roots of being useful for self-defense.

BJJ is such a fun thing to teach because you can learn a technique and then test it so you can know right away whether what you’re training is going to work. It’s not just a theoretical idea. Whereas in a lot of other martial arts, the rhetoric is good, but you don’t have a valid way to test it; it’s a lot of hypotheses. With BJJ, you can test it with full resistance, and you’ll know if your ideas work. So it’s a fun thing to teach because you can be confident in what you’re saying and you can see people become confident as they learn it and they’re successful.

In addition to being practical, an incredible value of BJJ lies in its ability to teach people how to deal with failure. No one in jiu-jitsu doesn’t get beat in training at some point. But that’s how you learn. Every time that happens, you improve in some way because you undeniably realize your shortcomings.

My son, who was used to being good at things and used to winning, did well in BJJ right away, but then he met better people. He lost and had a hard time dealing with it at the beginning, and then he realized that failure is a normal part of life. You do things, and sometimes you lose. Even if you tried your hardest and you’re good, you lose because the other person was better or the situation was such that you lost. And it’s okay; the world doesn’t fall apart. Life goes on, and then you try again.

I think that’s a crucial thing for people to understand. You prepare for a test, you study hard, and you blow it for a variety of different reasons. It’s not great, you don’t want that to happen again, but that’s life. You adjust and try to have a better result the next time, but falling to pieces isn’t going to help you get a better grade. So it’s how you respond to that. I think that BJJ and other sports teach people to be mentally resilient and understand that it doesn’t always go your way no matter how hard you try and how well you prepare. Nobody likes to lose, but it happens, and it’s what you do after that defines you.

My kids, over time, have started to see and understand that failure is a part of life, and success only comes when you adjust and prepare correctly. If you don’t put in the work, then you don’t deserve to succeed at whatever you’re doing. So we have to put in as much work as is needed and more; that’s how you achieve. And also, if it doesn’t go your way, keep pushing and grinding away at it. It’s not necessarily the person that’s the smartest or the most talented that’s going to succeed; it’s the one who’s relentless, and all athletics can teach that. They can teach you to be relentless in your pursuit.

Pursuing mastery in BJJ is no different than doing so in any other skill; the path to improvement is not always linear. Inevitably, you will have tough days on your journey where you get beat up and feel like your skills are regressing. But you have to keep in mind that there’s no such thing as a bad practice. Every practice that you attend is valuable because it was an opportunity to get better. Even if you didn’t learn anything new, but you had a chance to practice the fundamentals, then you learned.

So if you’re a parent reading this and you want to enroll your kid in martial arts because you see its value, here a few tips that could help you:

People will go all over town, sitting in traffic, to get a good deal on running shoes for their kid. But they’ll sign them up at the martial arts school that’s right around the corner. You’re entrusting your kid with a coach to train them, help them be excited about training, and fall in love with the sport. But you can also just completely crush all of that with a lousy coach; you can turn them off of the sport entirely. So something so valuable shouldn’t be chosen by how close it is to your house. Even if you’re going to have to drive further to go to someone better, you got to do it. Otherwise, you’re better off waiting, and at least you won’t spoil it for your son or daughter by taking them to the wrong person. So go check out the gym around the corner to see if they like it. But also check out at least three or four other places too.

You may not train in the particular martial art, but you can read a book and watch a movie or documentary about it. You can at least know what questions to ask a coach. By giving yourself time to become an expert, you can avoid bad coaches and gyms that are unsafe because you’ll start to have an idea, and you’ll be able to identify good from bad.

3) Find the right place and then back off

Once you find somebody you’re going to entrust your kid to, back off. The worst thing is a parent that’s trying to be a coach. You’re either the parent or the coach. When my kids were learning BJJ, I would bite my tongue and not say anything. My job at that moment is not to say anything about what’s going on in their training. My job is to shut up, let them train and have fun. That’s it; that’s my only job. Bring them to the right place and then let it be. Don’t be a sideline coach. The coach’s job is to coach; I don’t get to have an opinion about what’s going on. That’s very had to do, but that’s very important.