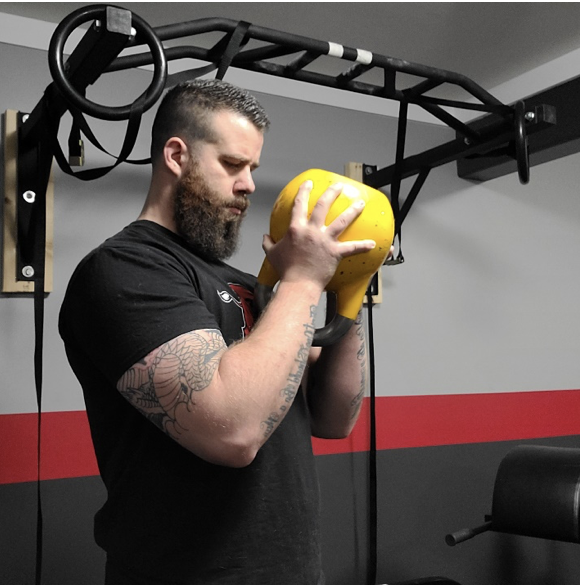 “Functional Fitness”. A term so widely used and abused that I’ve almost grown to hate it, but at its core it refers to exactly what we are all striving for at Agatsu, which is to teach people to “train in a way that is safe and moves them in the direction of their goals” – Shawn Mozen.

If you’re thinking of functional fitness as a pre-ordained set of exercises and methods and everything outside of those as useless, you’ve missed the point. Perhaps one of the greatest examples is direct arm training, written off by many in the functional fitness community as meaningless vanity training. Now, I personally disagree with that premise to begin with. Looking jacked and awesome is a great goal, or at least a welcome side effect! Plus, there are multiple non-aesthetic benefits to direct arm training:

Injury Mitigation: There may not be a curl event in powerlifting, strongman, kettlebell sport or gymnastics, but tendonous attachments at the shoulder and elbow have proved to be weak links that can cause injuries while performing compound lifts like deadlifts, stone lifting, farmer walks, overhead pressing and all kinds of non-strength sports. A little direct arm work can go a long way to thickening and strengthening tendons to make them harder to tear!

Performance: Triceps are one of the most important, if not THE most important muscles to train for elite pressing performance, both on the bench and overhead. Elbow flexors, especially the brachioradialis which plays a large role in grip strength can bottleneck results in any pulling exercise. Having trouble going from pressing the 40kg kettlebell to the 48kg, 10 to 15 chin-ups or finishing a strict muscle-up? Direct arm work may be the piece of the puzzle you’re missing!

Now, let’s say you’re on board but you don’t go to a normal gym where they have every size of dumbbell and 50 different kinds of cable implements. This is the article for you! Here are three tips for arm training, along with exercises utilizing bodyweight, kettlebells and household items:

1: Build Mass From the Top Down

Exercises are usually thought of as two major phases: Raising/Concentric (when muscles are shortening while contracted) and Lowering/Eccentric (when muscles are lengthening while contracted). When it comes to putting on muscle mass, we want to create as much mechanical tension and metabolic stress in the muscle tissue as we can, and the best time to do it is while lowering the weight. This is because thanks to a protein called titin that aids in a braking effect during the eccentric, you can lower with control up to 30% heavier weight than you can lift – or the same weight, but for longer. Overloading the eccentric is proven to be an effective tool for building certain types of strength as well but makes a HUGE difference for putting on mass. Keep in mind however that this does usually come at a price in terms of soreness, so it should be used sparingly for anyone with a demanding sport or job that can’t afford to take a few days to recover before hitting the same muscle groups again.

2. Work the Angles (Movement Angles, though Instagram Angles are Implied)

Even if you’re working the same general muscle groups, the angles you use can make a big difference in exactly what you’re accomplishing. For example, when flexing at the elbow you might think the biceps brachii is the main muscle you’re working but in fact the strongest elbow flexor is actually the brachialis, which is hit best by cross-body curls and hammer curls. When working the triceps, overhead extensions will target the long head while pressing and dips will hit the medial and lateral heads more. You don’t have to get too caught up in the anatomy, the point here is to try to mix up HOW you’re hitting muscles as much as you can, not just which ones you’re hitting. There are plenty of examples later in the article to get you started!

3. Push the Limits with Pre-Exhaustion

The pre-exhaustion method is when you work a muscle in isolation until it’s exhausted, then immediately switch to a compound exercise that uses the same muscle. For example, performing tricep pushdowns until the triceps are too fatigued to continue, then immediately dropping down for a set of push-ups. Since the pecs and shoulders can help, you’ll be able to continue to stimulate the triceps beyond what would have been failure. Like the eccentric overload we talked about earlier, this will pile on muscle but can result in nasty DOMS for a few days after the session so use wisely!

These exercises and combos will utilize everything you’ve learned about in the article above to turn super soakers into heavy artillery using only bodyweight, kettlebells and towels!

Tricep Scissors are a brutal bodyweight-only exercise for the triceps, normally done on the toes but can be scaled back by doing them on the knees or using band assistance from above. Stack the hands one in front of the other with the fingers toward the middle and allow the elbows to flare to the sides as you lower yourself with control to the floor and then press the hands hard down into the floor to return. Switch which hand is in front every few reps. Use triceps scissors to pre-exhaust the triceps before going right into a set of normal push-ups if you’re feeling particularly adventurous! 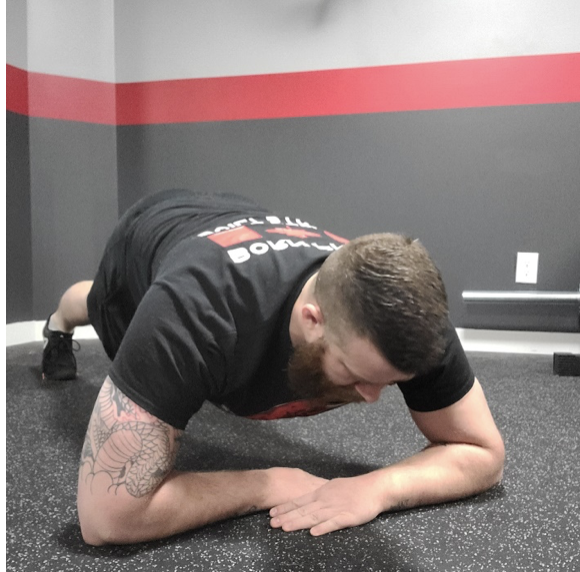 Even if you aren’t able to do a full chin-up, controlled chin-up negatives are a great way to work on yielding strength as well as build muscle in the arms and back. This is a great pairing with kettlebell crush curls, where you squeeze the bell with your chest, shoulders and grip like you’re trying to stamp your fingerprints into it while you curl it. Use a single long negative chin-up as a primer for a set of curls, or pre-exhaust with the curls and finish with a set of chin-ups! 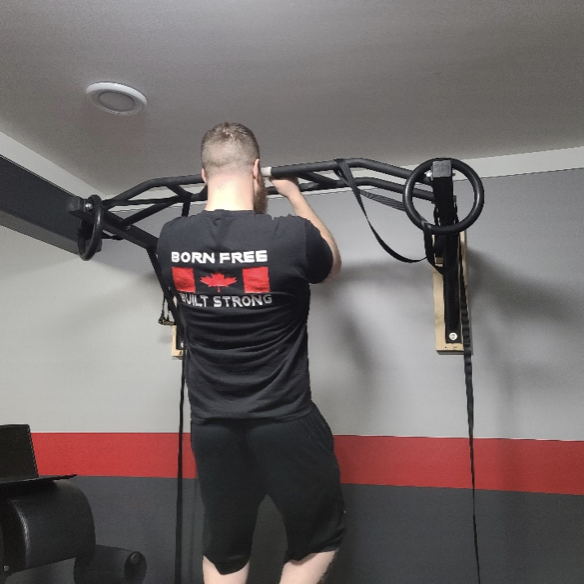 Zottman curls are a great way to cast a wide net over the muscles of the forearm and elbow flexors and hit the brachialis (the unsung hero of the upper arm) hard. Essentially you curl upward with a supinated (palms up) grip, turn the hands over at the top, and lower the weight with a pronated (palms down) grip. Kettlebells aren’t really built for this type of exercise, but a towel fixes that along with adding a bonus grip component! 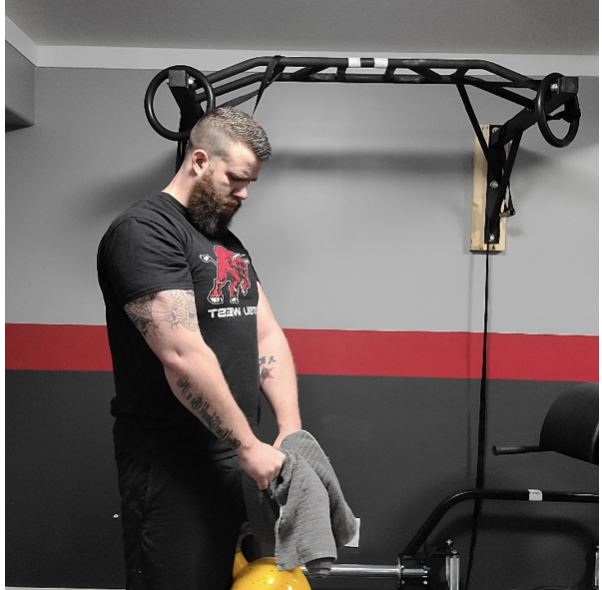 Overhead extensions have stood the test of time as one of the best ways to build both strength and mass in the triceps, particularly at the long head. Using a towel and a kettlebell, flare the elbows to the sides and think about pushing ‘up and out’ at the top as well as a controlled descent. 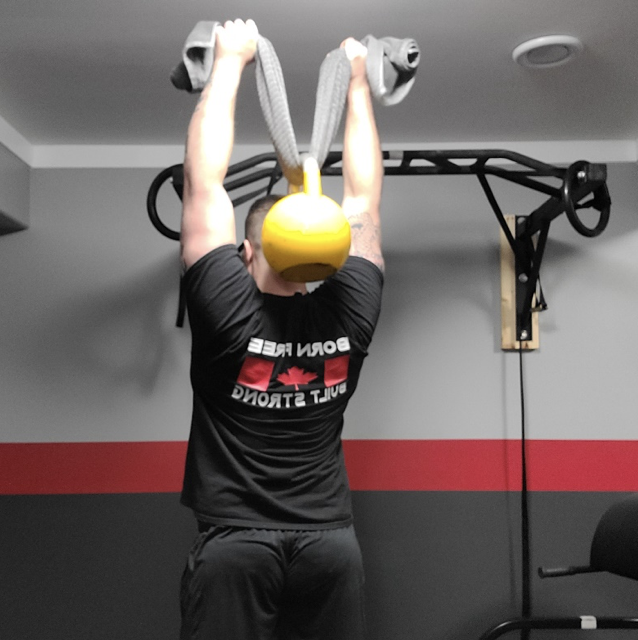 Hammer curls are a great way to develop the elbow flexors as well as the brachioradialis, a key component in grip strength. Overload the eccentric by using a weight just above what you can lift with one arm – curl it with both hands, pass both ends of the towel into one at the top and then lower it with just the one. Squeezing the fist of the off-hand can help to create more tension and help control the weight. 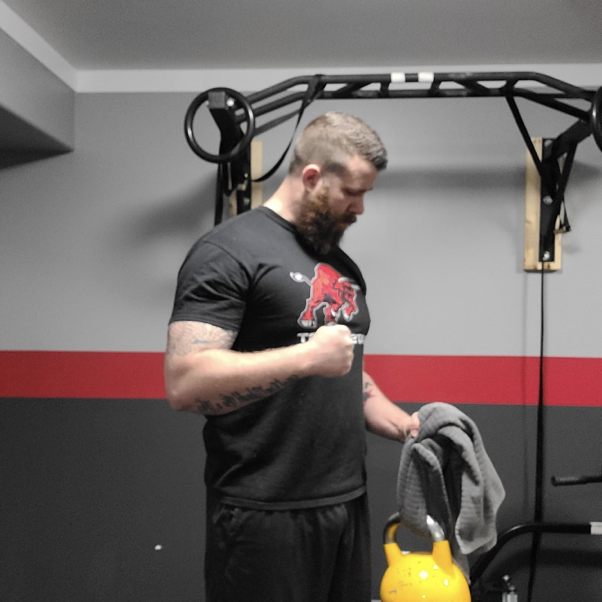 Sphinx push-ups are another bodyweight tricep-dominant exercise, not easy but not quite as hard as tricep scissors so it’s often used as part of a progression to work up to being able to do those in their pure form. Assume push-up position, then move one hand forward so that when you lower yourself into the push-up, one hand is pressing where the other is doing a tricep extension against the floor. This exercise also has a nice anti-rotation component to it when you focus on keeping the body flat! 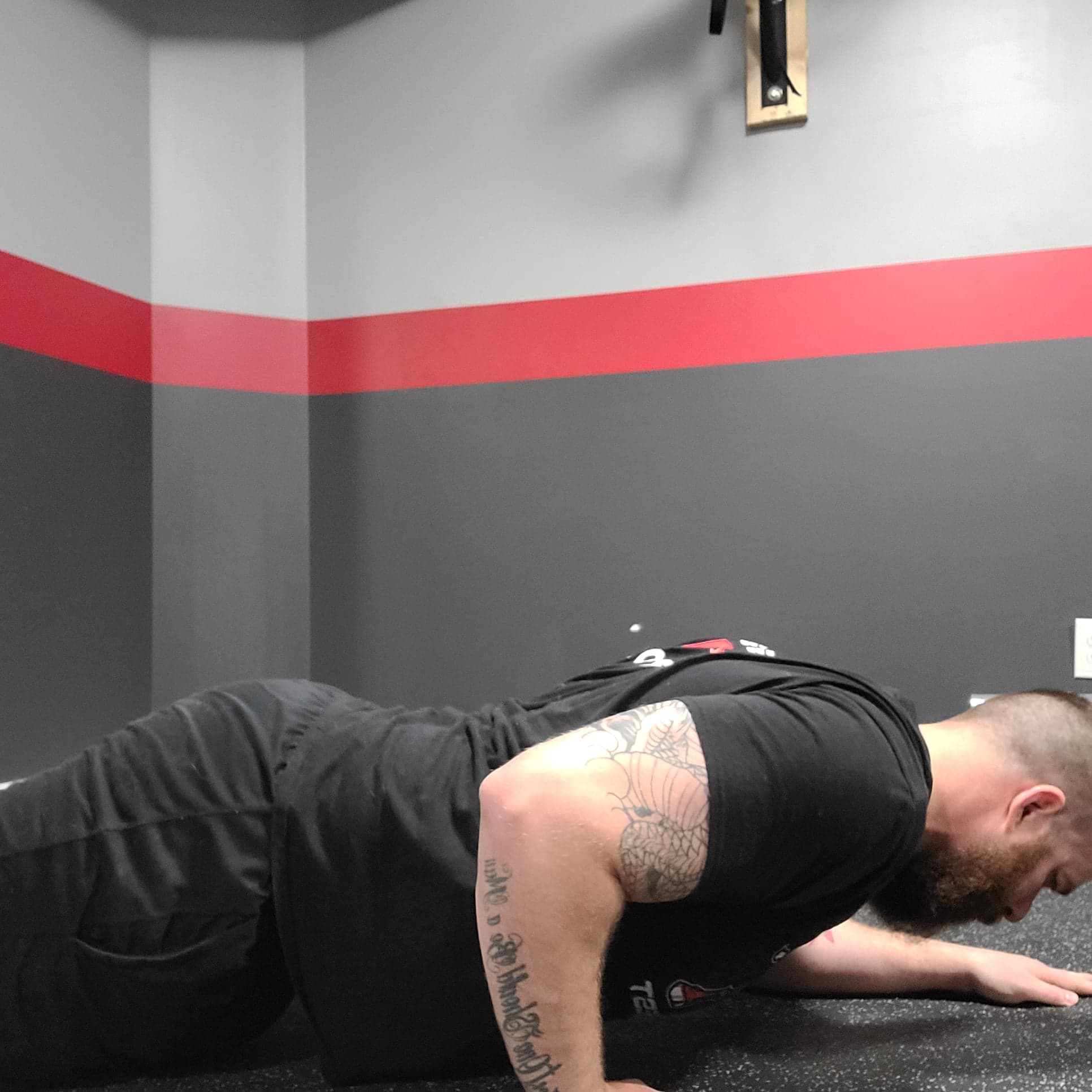 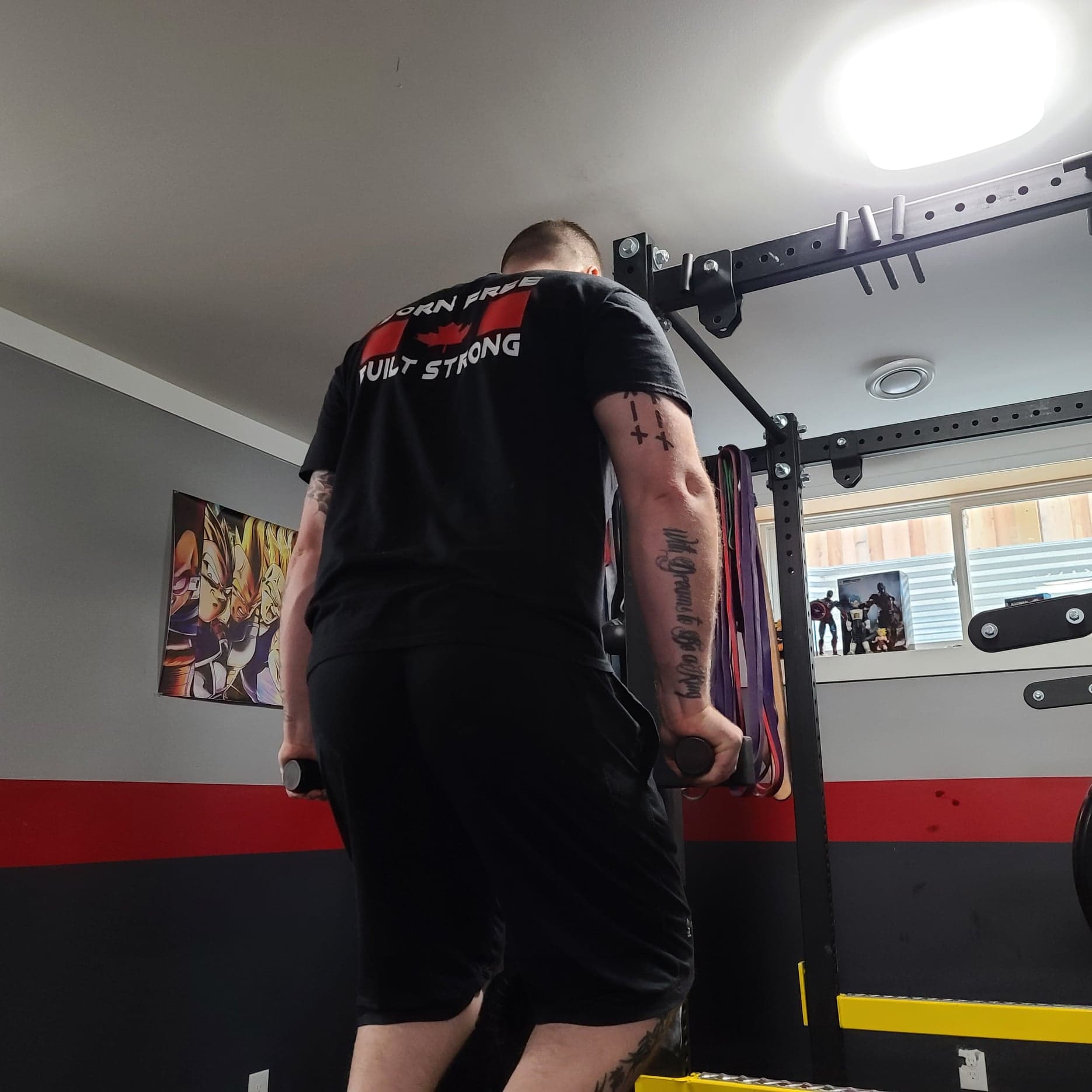 Cross-body curls can be done with the towel, but because the hand is only peaking about as high as the elbow the kettlebell handle actually works just as well for this one. Pre-exhaust the elbow flexors with the curl, then immediately go into a set of rows to stimulate them further with the help of the lats and upper back. 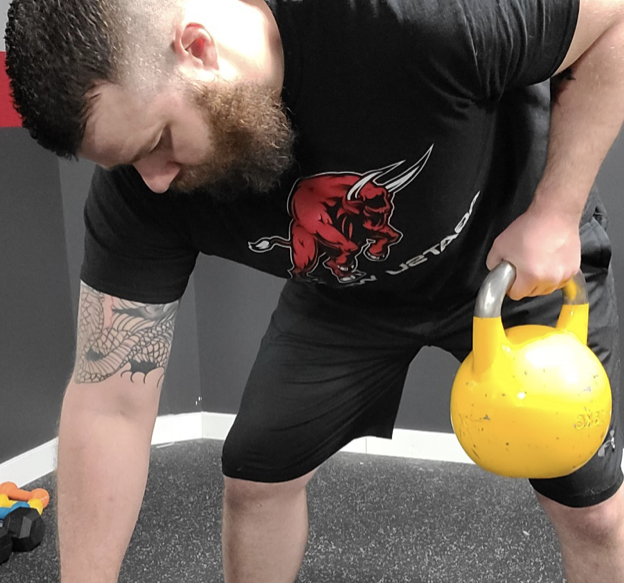 The California Press, where you do a press for the concentric and a tricep extension for an eccentric overload, is an absolutely brilliant exercise in all its forms but the overhead kettlebell version is my favourite. Back when I was training for my first 48kg kettlebell strict press, this was one of the main exercises that got me there. If you like many people are trying to break a pressing plateau and are able to get the bell moving but get stuck halfway up, this may be the piece of the puzzle you’re missing. That, and the pump is awesome.

Rack the kettlebell and strict press it overhead normally, but instead of lowering it in a straight line flare the elbow forward and lower the bell straight down to the shoulder in a tricep extension motion. Then, rotate the elbow downward to return to the rack, ready to press again. 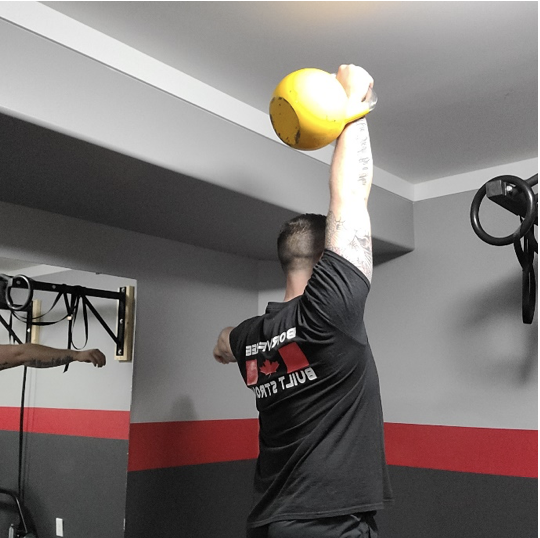 If you would like to learn more on ‘functional fitness’ and how to build a solid foundation of strength that will last a lifetime, check out our upcoming Agatsu Strength & Speed Specialist Course.